Close-up magic has a new destination 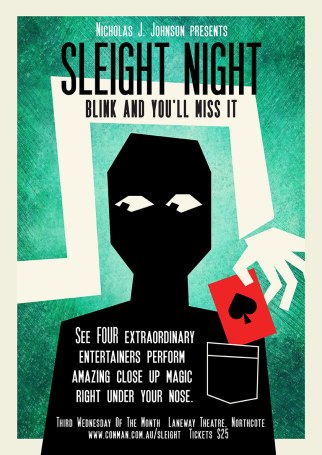 Blink and you’ll miss it…

On the third Wednesday of each month, the best of brightest of Melbourne’s close up magicians join forces to bring you an evening of extraordinary deceptions and illusions performed up close and personal.

With a different line up each month, every Sleight Night is a little different. One month, you’ll see the finest card cheats in the country, the next you’ll see world class mentalists bending spoons right under your nose.

With only 32 tickets available each month this is an exclusive and intimate event at unique venue that has been specifically built for close up magic.

Bayden performs regularly at Sleight Night. Keep an eye on his Facebook page for details.

Professional magicians, Dom Chambers and Bayden Hammond, combine astounding magic with hilarious sketch comedy. Their award-winning debut show took audiences on a side-splitting journey involving everything from disastrous dates to incompetent lawyers. Met with high praise, the show was a sold-out success across multiple festivals in 2015-2016.

The lads are now touring their sophomore show, Gone Girl, a shameless parody of Hollywood thrillers. Featuring their trademark cast of quirky characters, the story follows one man and the perilous quest to save his kidnapped dog. This critically acclaimed production was a hit with audiences at the 2017 Melbourne Magic Festival, and can be next seen at the 2018 Melbourne International Comedy Festival.

“Best theatrical magic show I have seen yet! A show bursting with comedy, movie references and plenty of surprises and magic. I left wanting more.”
TayAroundTown.com

“A work of excitement with fantastical props and wickedly mystifying illusions… never a dull moment on stage… not to be missed.”
ThePlusOnes.com

For Dom Chambers, life as a magician is a sweet one. But when his dog is suddenly kidnapped, he is thrust head first into a perilous cross-border adventure to save her. Drawing on his unique talents, he soon uncovers a complex web of deceit, and spirals ever closer to a blood-chilling truth that will change him forever.

The beloved sketch comedy magicians, Dom and Dumber (Dom Chambers, Bayden Hammond), return with their brand new show, Gone Girl. Featuring their original and award-winning breed of entertainment, the show follows one man and the epic quest to save his kidnapped dog.

“We wanted to raise the bar for our second show,” explains Dom. “Rather than a series of unrelated sketches, we wanted there to be a compelling story arc that tied them all together.”

And quite the story it became. Showcasing their trademark cast of quirky characters, this second instalment is an unabashedly shameless spoof of Hollywood thrillers, complete with a mind-bending plot twist that you won’t see coming. And, with a clever array of magic and illusion woven into the story, Dom and Dumber will once again leave you gasping and laughing out loud, all in the same breath.

“I like to think of it as Harold & Kumar meets Taken” Bayden muses. “A genre mashup of theatrical comedy and psychological thriller, sautéed with a dash of David Copperfield.” Dom and Dumber’s Gone Girl debuts at this year’s Melbourne Magic Festival, running from July 11-15. And with their previous show achieving sell-out success at the Melbourne International Comedy Festival, audiences can look forward to falling in love with this cheeky duo all over again.

Don’t miss out, tickets are on sale now!

The end of the year is fast approaching, and in what has quickly become tradition, December marks the big, end-of-year Christmas show for Top Hat Tuesday. And in order to properly celebrate its fourth year, it’s going to be bigger than ever – a royal rumble with seven performers! It’s a chance to send off 2016 with a bang, and to salute what has been an absolute joy ride of magical entertainment over the year.

Funnyman Bayden Hammond will host the evening, showcasing a mix of big names, fan favourites, and exciting new faces. So come and join the fun, and bring some real magic to your festive season!

Meet the stars of the Me

lbourne Magic Festival up close and personal! Set in the intimate surrounds of the Studio 2 Close-up Gallery with audiences of just forty per show, you’ll be treated to the best and brightest of the festival performing magic so close you can touch it.

The Best of The Magic Fest is the place to see magic the way it was supposed to be performed – right under your nose!

Catch Bayden in the line-up on Friday  8th July and Saturday 9th July, show from 9.30pm.

Catch Dom and Dumber at the 2016 Melbourne International Comedy Festival 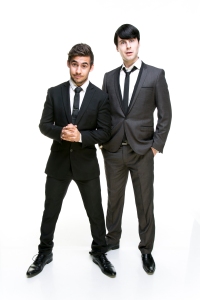 After a sellout run at the 2015 Melbourne Magic Festival, Dom and Dumber are bringing their critically acclaimed show to the Melbourne International Comedy Festival in 2016! Winner of Candlelight Productions coveted award for Artistic Excellence, it’s easy to see why audiences have fallen in love with this cheeky duo.

“This show was by far the MOST HILARIOUS magic and sketch comedy show that I have seen in a long long time! My friends and I were laughing like wild hyenas in the second row, and at times I had trouble catching my breath in between fits of laughter! The magic was impressive, clever and very hilarious and it was well weaved into the sketches. If you want to start your night out with heaps of laughter, go see this show – highly recommended! This is definitely a show not to miss!”
tayaroundtown.com 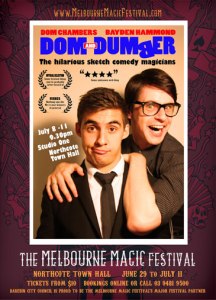 Award winning magicians, Dom Chambers and Bayden Hammond, have come together to combine astounding magic with side-splitting sketch comedy. “If there’s one thing we love just as much as magic, it’s sketch comedy” Bayden describes. “We just can’t get enough of shows like Saturday Night Live, Mad TV and Key & Peele.”

Boasting a colourful cast of characters, Dom and Dumber takes its audience on a hilarious journey involving call centres, restaurants, movie theatres, lawyers, dating, religion and more! Nothing is sacred in this fastpaced mash-up of theatrical comedy and illusion. “We’re really pushing the boundaries of what live sketch comedy can achieve” Dom adds. “We don’t just want to make audiences laugh at the ridiculous scenarios we’ve dreamed up, we also want to blow their minds with the sneaky magic we’ve integrated into the stories.”

Dom and Dumber: The Sketch Comedy Magicians is exclusive to the Melbourne Magic Festival, running from July 8th – 11th at 9.30pm in Studio 1.

For details and tickets, visit www.domanddumber.com

For the love of magic… a reflection on Top Hat Tuesdays.

It’s hard to believe, but as 2014 draws to a close, Top Hat Tuesdays has been running for two and half years! It seems like only yesterday that we humbly debuted our variety magic show at Charltons in June 2012.  Since then, it has grown and evolved into one of my proudest achievements. But I certainly cannot keep all the credit to myself. The show simply would not exist without the dedication of my fellow producers: Siew-Li Hodge, Tayissa Artomonow and Dom Chambers (pictured). These are the tireless faces behind the scenes – wonderful people driven only by their passion for the art.

But the support doesn’t end there! At every show, performers present their acts for a fraction of their professional fees (a mere token, in fact). These magicians are supporting our show because they love magic, they love the atmosphere, and above all, they love putting a smile on people’s faces. Melbourne is lucky to be home to some of the world’s greatest magicians and most vibrant magic scenes, and I feel absolutely privileged to be a part of it. And the best news – everyone can be a part of it! Because, when all is said and done, the real reason Top Hat Tuesday exists, is because of YOU. The fun-loving Melbournian. No matter who you are, what your background is, or what walk of life you’re in, our little show is here to bring a spark to your eye.

So I hope you can join me on Cup Day as I host our next edition of Top Hat Tuesday. You know it might just be the touch of magic you’re looking for 😉

For all your Top Hat Tuesday news, ticketing and info, be sure to visit www.tophattuesdays.com or join us on Facebook.

It’s that time of year again! The Close Up Gallery is my favourite show of the year, and one of the hottest tickets at The Melbourne Magic Festival. Each night, a rotating line-up of magicians showcase their skills of close-up illusion – this is magic so close, you can touch it. No camera tricks, no complex stage props, only the real deal cuts it here! 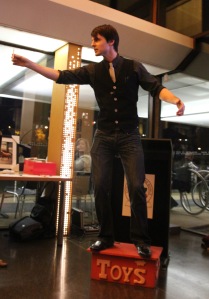 Another fun year of magic is well and truly under way – I can’t believe it’s already May!

This weekend, you can catch me performing at the Edgars Mission Foundation Day exhibition. This wonderful charity provides life-long love and care to over 300 rescued animals. This free event provides a wonderful opportunity to learn about Edgars important work, and to catch me doing some mischievous magic in the process!

Where: Melbourne Bowls Club (Flagstaff Gardens in the city)
When: Saturday May 10th, 5.00pm-8.00pm
Cost: FREE! See link below to RSVP.